One factor that was crucial in shaping the outcome of World War I was the transport system. As the troops were mobilised to the horrors of trench warfare on the Western Front in 1914, the problem of getting supplies to them, in the thick of the conflict, was a massive challenge for the War Office.

The railway system provided the necessary logistical capacity to transport supplies from Britain to massive armies in the field, including artillery shells, but once the supplies reached their destination in Europe, the new objective of getting them to the heart of the combat began.

Up to two million British soldiers were serving on the Western Front, split into divisions of around 12,000 men each. They required around 1,000 tons of supplies daily, including food, bullets, blankets, bandages and artillery batteries. This equated to two supply trains of 50 wagons each.

Even larger quantities of supplies were needed when a new offensive was being planned, as the War Office had to allow for the possibility of the troops being in one place for months while the operation proceeded. 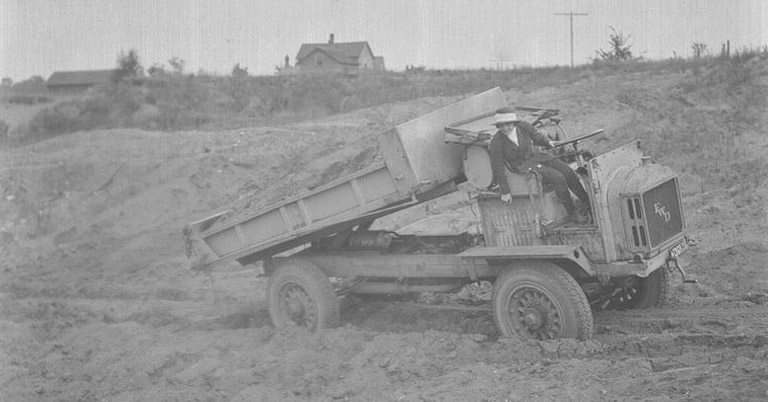 The British troops had their own unique challenges, with the transportation system complicated by the English Channel. War supplies were taken by special ferry across the water in wagons, arriving at a Channel port in France. They would be loaded on to the French trains and taken to the main supply areas behind the British lines.

Once the items had arrived by rail, the next major task of taking them to the frontline began. The problem was that the goods had to be taken across around seven miles of rough terrain to the front. Anyone completing the transport run was in danger of being hit by long distance artillery shelling.

Horse-drawn vehicles were used for some of the transportation, but the daily round trip of around 14 miles was too much for them. Similarly, dogs (specially trained at the War Dog School of Instruction in Hampshire) were utilised in and around the trenches for carrying small amounts of supplies. Pack mules were also used in areas of difficult and muddy terrain.

When it came to transporting bulk shipments from the main railway storage areas to the frontline, large and reliable vehicles were needed. The war effort wouldn’t have been possible without the use of motorised transport, the mechanics who kept the vehicles in good repair and the drivers who risked their lives to complete the missions.

More than 1,000 civilian lorries (and more than 300 buses) were requisitioned at the start of the war as military vehicles. They were shipped across the Channel by ferry.

The War Office had launched a scheme whereby the vehicles’ owners had been offered a subsidy to buy trucks and lorries that met the War Office’s specifications, on the grounds that the vehicles could be used temporarily in Europe to transport supplies.

London buses were among those requisitioned and these remained in service until the end of the war in 1918. The War Office also ordered thousands more heavy goods vehicles from British manufacturers, and later, from American companies.

Although there was still a reliance on horse-drawn transport, the war effort increasingly depended on motorised transport. The problem of using horses was that horse feed took up more space than the supplies being sent for the troops.

Beginning, in July 2016, the conditions during the Somme campaign caused fresh problems for the lorries and buses, since a combination of torrential rain, inadequate roads and the weight of the supply-laden lorries on narrow, solid rubber tyres, led to many of the vehicles becoming bogged down in the mud.

It was a major feat for the drivers and mechanics to keep them going to supply the British artillery with the 28 million shells needed for the Somme conflict. The lorries were transporting 20,000 tonnes of supplies every day, along a front of around 12 miles. It was an ongoing massive challenge to distribute them adequately.

Among the heavy goods vehicles commonly used to transport supplies was the FWD Model B truck, constructed in the United States. It was used by the US, Britain and Russia during World War I and was so well-built that it saw further service in World War II.

It had first been manufactured in 1912, before the war, by the Four-Wheel Drive Auto Company (FWD), although it had been built to military specifications. More than 17,500 of the trucks were built and many of them were taken into military service.

Based on an earlier model, the 1908 “Battleship” lorry, which had first been built in Clintonville, Wisconsin, the design was revolutionary in that it had a four-wheel drive set-up that was more practical.

In late 1916, the British began to construct further lengths of light railway tracks to ease the strain on the supply chain. Although they helped to bridge part of the gap, they were also vulnerable to enemy fire.

In 1917, a newly created Allied Labour Corps, including thousands of recruits from Egypt, China, India and other Empire countries, was set up to help keep the supply chain moving and support the defensive lines for the duration of the war, until it finally ended on 11th November 1918.

We will remember them

People across the UK are preparing to commemorate the 100th anniversary of the end of World War I on 11th November, when Remembrance services will be taking place at churches and cenotaphs across the nation.

Here at Driveline, we will be joining the nation in remembering the brave men and women who lost their lives during the conflict to protect the freedom of future generations.

A two-minute silence at 11am enables people to reflect on the ultimate sacrifice made by so many people of all nationalities.