John Denver was one of the most popular singers of the 1970s. He recorded around 300 songs and sold more than 33 million records during his long and colourful career, which spanned three decades.

Thanks to his wholesome “country boy” image, the acoustic artist was beloved by his fans. In later life, he moved to the retreat of Aspen, Colorado, where he enjoyed photography and painting in his leisure time.

As a prolific songwriter who wrote around 200 of his own songs, the folk icon achieved 14 gold and eight platinum albums. Sony Records has revealed he is still one of the five best-selling artists of all time, despite his untimely death in a plane crash in 1997. 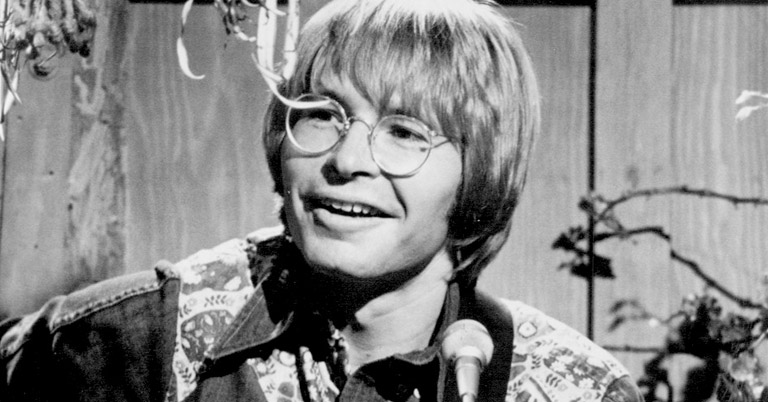 Where did it begin?

Denver was born into a military family, as his father, Captain Henry John Deutschendorf Snr, was a pilot with the US Air Force. He and Denver’s mother, Erma Louise, lived on the Roswell air base when their son was born in December 1943.

Denver’s real name was Henry John Deutschendorf, but he changed it when he first became interested in a music career – reportedly because he felt his real name would be too long for the publicity posters outside a venue!

His father was relocated to Tucson, Arizona, where Denver joined the Tucson Arizona Boys’ Chorus. He also taught himself to play the guitar, after he received one as a gift from his grandma when he was 11. He played live in local clubs to pay his way through college.

In the late 1960s, Denver became a respected songwriter, but for other artists, rather than for himself. He wrote Leaving on a Jet Plane in 1966 for folk trio Peter, Paul and Mary, although he later released his own version.

At first, he was unable to win a record deal for himself and was rejected by multiple record companies. His acoustic style was thought to be too old-fashioned and folk-oriented. Record companies felt the era of folk was over and no matter how good Denver was, none of them wanted to sign him.

Finally, Harry Jenkins at RCA liked Denver’s sound and he launched his own recording career in 1969 when he was 26. His first album was Rhymes and Reasons, but RCA failed to organise a promotional tour for their new signing.

Undeterred, Denver organised his own random tour across the American Midwest, offering to play for free at venues in various towns en route. He was already known as the writer of Leaving on a Jet Plane, so when he turned up at local radio stations, guitar in hand, to promote his album and tour, he was usually able to win some air time.

He earned money to keep his tour going by either being given the door takings by the venue or selling copies of his album after the show. The tour was a huge success and continued for many months.

He built up a big fan base and his drive and ambition persuaded RCA to further extend his contract. He was offered a four-album deal, which was unusual in those days.

His simple acoustic songs struck a chord with the American and the British public and he became a best-selling artist. He also hosted his own variety and music television shows, with more than 60 million viewers watching his Rocky Mountain Christmas on the ABC network.

Perhaps his most famous song was Take Me Home Country Roads, which was certified platinum in the US, after selling more than 1.5 million copies. It was certified gold in the UK, with 400,000 sales. Digital copies of the hit continue to sell today, more than 20 years after his death.

The song further reinforced Denver’s image as a simple country boy, yearning to go home to West Virginia. The narrator sings about how the radio show reminds him of his “home far away”, as he adds, “Driving down the road, I get a feeling that I should have been home yesterday.”

The song was co-written by Denver, American songwriter Bill Danoff and Danoff’s wife Taffy Nivert. Danoff said in interviews he had felt inspired to write the song while driving along country roads to a family reunion in nearby Maryland.

He was driving along Clopper Road, which was surrounded by rural landscapes at the time. Today, the scenery has changed drastically from the days when it could be called a “country road”.

In December 1970, Danoff and Nivert were playing live as a duo at a club called The Cellar Door, in Washington DC, where they were Denver’s support act. The three of them had an impromptu jam after the show and Danoff told Denver he was working on a new song, Country Roads.

He had been writing it for around a month and was planning on giving it to country singer Johnny Cash. However, when Denver heard the song, in his own words, he “flipped.” The trio ended up reworking the song and staying up all night until they were satisfied, moving the lines around and writing new words.

Finally, they were happy with the song and Denver wanted it for himself. It was premiered live on 30th December 1970, at the end of his set. It received a five-minute ovation from the crowd. Recorded in January 1971, it was released to great critical acclaim in April 1971.

It became an iconic symbol of West Virginia and more than 40 years later, in March 2014, it became an official state anthem. As the theme song of West Virginia University since 1972, it has been played at every home football pre-game show ever since.

Not all of Denver’s peers were happy at his sudden rise to fame. In 1975, he was nominated for the Entertainer of the Year title at the Country Music Awards, presented by country singer and songwriter Charlie Rich.

Denver won the award, beating off stiff competition from established country stars such as Loretta Lynn and Conway Twitty. After Rich opened the envelope and realised Denver had won, he took a lighter from his pocket and set the card alight!

It was generally viewed as a protest against country music’s crossover with pop music. Unfazed by Rich’s actions, a delighted Denver gave his acceptance speech, while Rich was ultimately blacklisted from future shows.

Denver became a huge supporter of humanitarian and conservation projects, founding an environmental organisation, called Plant It 2020. He visited Africa to discuss solutions to world hunger with African leaders in the 1980s.

He celebrated Earth Day 1990 by hosting an environmental TV program, In Partnership With Earth, in collaboration with the US Environmental Protection Agency.

Denver moved to Aspen and lived there for much of his life. He was awarded the honour of being the state’s Poet Laureate in 1974. In 2007, his song, Rocky Mountain High, was made an official state anthem, while Denver was also inducted into the Colorado Music Hall of Fame.

Tragedy struck on 12th October 1997, when Denver, who was a trained pilot with more than 2,700 hours’ flying experience under his belt, died at the age of 53. He was piloting a Rutan Long-EZ aircraft when it crashed into Monterey Bay, California, as he came in to land at Monterey Peninsula Airport.

He has left behind a large catalogue of work and digital versions of his albums, and singles continue to sell today.

Driveline’s van and truck hire services are perfect if you’re planning to move home – we have a large range of vehicles!