For many people, it’s not Christmas until they’ve seen Coca-Cola’s famous advert, Holidays are Coming! Lots of people look forward to the new Christmas ads every year. In fact, a study by the Advertising Association claims 33% of people get more excited about the release of a new festive advert than they do for the premiere of a film!

There are various Christmas adverts for just about every high street and online retailer, but Coca-Cola’s iconic Holidays are Coming campaign, featuring the soft drink manufacturer’s mighty red truck, is one of the most famous, as it has been a feature of the festive season for 23 years. 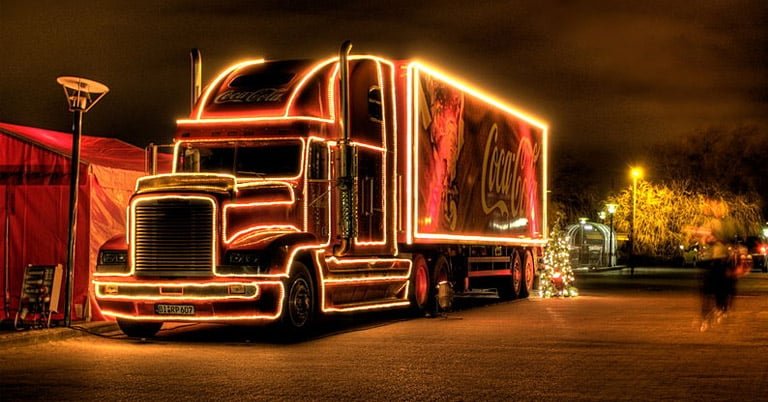 The truck, filled with bottles of ice-cold Coke, was first seen on our television screens during Christmas 1995, when the Holidays are Coming song accompanied footage of a sparkling cavalcade of red trucks.

Covered in glittering festive lights, the trucks drove along in a convoy, spreading Christmas cheer as they stopped off at towns and cities across the United States, handing out free bottles of Coca-Cola along the way. Epitomising the spirit of giving at Christmas, the Holidays are Coming theme is as popular today as it was in the ’90s.

The Coca-Cola truck has been on the road in the UK in the run-up to Christmas for the past eight years. This year, it began the tour in Glasgow on 9th November and will make its final stop in Croydon on 16th December.

At each stop, Coca-Cola fans will have the chance to take a festive selfie and project it across the side of the truck, while enjoying a 150ml can of Coca-Cola Classic, Coca-Cola Zero Sugar, or Diet Coke. The truck will also be promoting an environmentally friendly message, encouraging people to recycle their cans and bottles.

Since its launch in the UK, the truck (adorned with more than 8,700 sparkling fairy lights) has travelled more than 730,000 miles and has spurred some 50,000 festive photos. The visits are accompanied by Christmas music, which is either recorded or sung by a live choir. There will be 24 stop-off points on this year’s tour.

The hashtag #HolidaysAreComing is tweeted around 57 million times in one year, while the truck even has its own Twitter account and can be tweeted @ChristmasTruck!

The Coca-Cola brand is synonymous with the festive season, with the original marketing campaign being created by the ad agency WB Doner in 1995. The illuminated lorries in the adverts were made brighter and more magical as a result of some technical wizardry created by Industrial Light and Magic – the company responsible for some of the effects in the Star Wars films.

Although only three lorries were used during filming, the special effects made it appear there were hundreds of trucks in a huge convoy. Artist Haddon Sundblom designed the images of the Coca-Cola Santa that features on the trucks – with the jolly man in red smiling and raising a bottle of Coke to toast Christmas in the advert. By 1998, more than 100 countries worldwide were broadcasting the famous advert.

The Coca-Cola trucks introduced new Christmas packaging, known as “Santa packs”, in 1996, featuring imagery by Sundblom. They are sold in the UK, the United States, Australia and other selected countries.

The Holidays are Coming theme has become so legendary that other retailers have copied it. Aldi has done its own parody of the ad, with the budget supermarket’s Christmas character, Kevin the Carrot, depicted at the wheel of a big orange lorry, driving along a snow-covered road.

Instead of saying “Coca-Cola” on the lorry’s side, it says “Kevin the Carrot” and there’s a picture of the character wearing a Santa hat on the back of the vehicle! However, Kevin ends up in a precarious situation, when he almost drives the lorry off the icy road and his cargo of carrots hangs over a cliff edge!

The Coca-Cola lorry tour hasn’t run without its fair share of hitches. In 2017, protesters insisted that the sugary drink encouraged obesity in children and campaigning began in earnest again this year. Coca-Cola has responded, and 90% of the drinks handed out this year will contain zero sugar and no drinks will be handed out to under-12s unless they are accompanied by a parent.

Driveline’s MOT Testing Station is an Approved Testing Facility for heavy goods vehicles. We can offer a single-point solution for all your commercial vehicle requirements. Please contact us for more details.