Cornwall’s picturesque coastline boasts more than 300 miles of unspoiled cliffs and dunes. Known as the Cornish Riviera, the south coast is home to numerous picturesque harbour villages, while the north coast has plenty of seaside resorts that are famous for surfing and summer holidays. 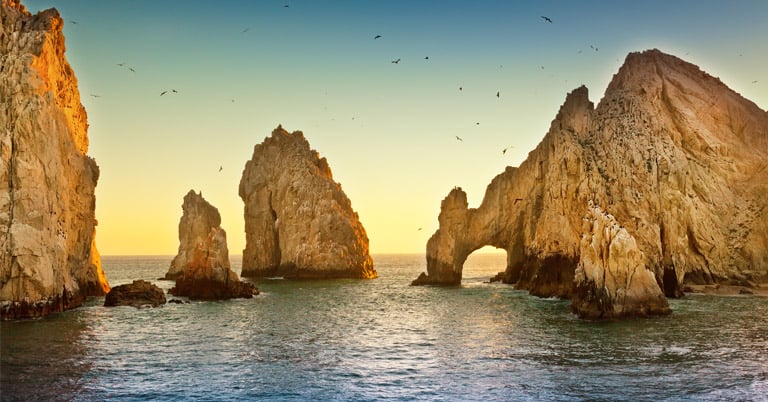 When you visit Cornwall, there are lots of must-see attractions for everyone, whether you’re going on a family holiday, a romantic break, a surfing trip, or to visit places of interest. Read on to find out more about Cornwall’s top 10 attractions…

With two giant biomes that contain plants collected from a multitude of diverse climates and environments across the world, the Eden Project is truly a spectacular visitor attraction – located in a former china clay pit between St Austell and St Blazey. Featuring thriving plants in tropical and Mediterranean environments, the stunning outdoor garden areas contain even more beautiful plants and flowers from temperate climates. It’s a great day out for all the family.

Granite cliffs create a breathtaking backdrop at the most westerly point of mainland Cornwall. Land’s End is a popular visitor spot that is famous for being the start or finish of journeys from one end of the country to the other: John o’Groats in Scotland.

This legendary monument is set on a headland, with wonderful views out to sea. It is one of King Henry VIII’s most magnificent coastal fortresses. It has defended Cornwall since the Tudor era, playing an important role at times of conflict, including both world wars.

A popular visitor destination, it boasts children’s interactive exhibits and stunning views from the top of the keep. Meet costumed characters from the castle’s past, see various exhibitions and witness the ancient gun being fired daily between April and October.

Trebah Garden is a 26-acre, well-stocked garden, located near Glendurgan Garden and the Helford River, in the parish of Mawnan. Enjoy the summer sunshine as you stroll through the colourful grounds, which were acquired by the Fox family in 1831.

Originally laid out by Charles Fox, the garden was further developed by his son-in-law, Edmund Backhouse. After falling into decline in the second half of the 20th century, it was lovingly restored and opened to the public in 1987.

Newquay Zoo was launched on 26th May 1969 by the local council on a six-acre plot of land. Today, it has expanded and developed into Cornwall’s largest zoo, covering an area of more than 13 acres. Home to more than 130 species, it features an African Savanna area and a Philippines area housing endangered species, such as the spotted deer.

Fistral Beach, located in Fistral Bay, on the north coast of Cornwall, is world-famous for its surfing. Exposed to Atlantic swells, conditions are consistently great for riding the waves.

The beach hosts many international surfing competitions – a competition suite has been built at North Fistral for the judges and competitors.

For music festival lovers, Boardmasters is just around the corner!

Nestling in the heart of St Austell, Pinetum Gardens is a place of tranquillity and breathtaking garden scenery. The family-run attraction has been developed over the past 40 years into 30 acres of the county’s largest plant collections. There are ten individually themed gardens. It is a popular destination for garden enthusiasts, dog walkers and for family days out.

This popular art gallery in St Ives exhibits work by modern artists, most of whom have links with the local area. The modern building was built between 1988 and 1993, on the site of the former gasworks. Attracting around 210,000 visitors annually, the gallery reopened in October 2017, following a major refurbishment.

The Tate has also taken over a museum in St Ives – the Barbara Hepworth Museum and Sculpture Garden.

On the banks of Cornwall’s Helford River, next to the quaint village of Gweek, the sanctuary opened in 1975. Owned by the Sea Life Trust, its origins go back to 1958, when sanctuary founder Ken Jones found a baby seal washed up on the beach near his St Agnes home. He rescued and reared it and his hobby grew, until his single pool was no longer large enough to accommodate all the seals, so he founded the current site at Gweek.

With five pools and a seal hospital, where an average of between 60 and 70 seal pups are recuperating, it’s a popular attraction for all the family.

This traditional cider brewery offers tours and a free sample for visitors, plus there are also various farm animals that children can pet. Located at Penhallow, Truro, the family-run farm has been making cider for more than 30 years. It also brews a selection of award-winning spirits, wines and preserves.

Thousands of visitors are welcomed every year for a great day out for all the family. It’s free admission and there’s also free parking.

Driveline offers a reliable range of vehicles for hire – our modern motorhomes are ideal for getting away from it all with family and friends.

Please contact us for further details of our range of affordable hire vehicles.